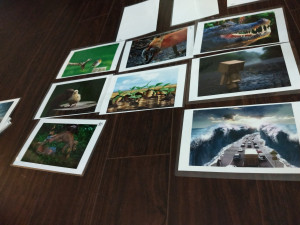 kid was like tazmania devil. banging on things. somebody commenting that if he'd banged his had again he would have gotten knocked out. but he was saved. had his jacket pulled over his head. red. red and black. pulled it back down. or told him. he'd been here before, when he tried to knock the dogs. says "slane and __" in an insulting way and he/i augh, no, my name is CONNOR. not SLANE. oh those are the names of my neighbors. not mine. kat's. wtf. are they here.

Kat talking to Geo. she likes him a lot. I'm really jealous. graveyard. car. I think my car is stolen but just the engine is stolen. that's worse. horror movies. i think i'm watching a terrifying one, call kat, she's too busy to watch with me. or can't leave her house. she's talking to geo and i'm mad. thn i read their messages and geo asks about me, asks about my openness, kat tells him i'll never be over matt but maybe will be open someday. mixed feelings. lots of guys around my car in the graveyard. it is nighttime i think i call my dad. i imagine kat is annoyed about geo because he's talking about me. but he was mine first. i never thought they'd even get along. one words. i realize my own worth. sort of. when kat talks to geo it makes me want to talk to him more. so jealous. rage jealous. leave my people alone they are mine. i liked him a lot. i do like him a lot? we were fighting over him but he is oblivious, indifferent. really it turns out the horror movie isn't scary at all. i wonder when i do think it isi scary why i do not just turn it off. but i don't. then amongst th arguing i see it in the background and i realieze it is a stupid movie. street steet..speeding? something happened here...my mom is there, we're speeding or something. i am on drugs? i am cocaine, no...something you huff, and i am driving and she catches me. i want...fuck what was it? what happeend? why am i remembering a dream in a supermarket or shopping mall with clothes, was that actually this dream? no i swear it was another. something happened hre in a car. i cannot rmeember.

running on the street, looking at slanted wood, imagine running across; can hear the noises of m swift feet tapping the wood. run so fast, can't really, god i want to run so fast. i imagine i am with a friend. really i am only running on the ground. cute dog tazmania keeps trying to hit, but i'm trying to hit it, to show his horror. to show he's out of control. but i want to miss. i'll give you $35 worth of sourkraut if you promise to never come back here again. i'm me and this really nice guy at the same time. nice guy. it feels so bad to be him, he is all alone here selling hot dogs and crazy kids come in that he has to handle on his own.

pills insane asylum. first one is hard to swallow, but i do, then i get nauseated. i ask woman if that one is supposed to make me sick and she says no. i don't know if i believe her? i am writing a letter to someone in there but the letter costs $$ a page, so i stop mid-setence or just stop it short, and i hate that. then there's this other pill that's supposed to cure my depression. i feel utter despair. i tell my mom not to tell me what the pill is because i don't want any tip offs. i don't want bias. this one is easy to swallow. she tries to give me the other again and it's too hard to swallow this time. i explain that i already took it. i'm o the phone and the letter. keep hvaing flashbacks to other dreams, or maybe it ws this drea and just so far back. no, kat and a road and a pit. alligators. that was so another dream. i walk downstairs after i take this pill and i tell my mom it's still not working. she says give it some time but seems disappointed. i wonder about my empty stomach. is it empty? go upstairs to th bathroom and sit down to pee and one light in the bathroom won't go on. i'm scared. and i'm yelling inside my head about the absurdity of light and i twon't go on and that's not fair, can't people see i'm in pain? i'm on a pill? anything could happen now. who was i trying to write in the asylum? who's there? i can't remenber. it's so fucking stupid that i have to pay to write this letter. i should send for free. pages should be free. words should be free. i should not have to pay to send a and it should not be a privilege to receive words. hurtful bastards. i hate you all. i think. i guess. i worry. i worry so much. will i vomit? will i feel despair forever? why do i imagine myself doing things in dreams. dreams are where visions manifest and wonder come true, when i close my eyes i can see the wood, maybe like wood of oak island.

You know when you hear a song and something about it sends electricity through your body? There are particular notes that move through you and produce this ineffable high.

Why does that go away the more I listen to the song? What does that mean?

Driving now feels good, but it will never feel the same as it did the first time I drove.

Is this how I feel about love? I don't feel like this about individual people. The more I know someone, the more my appreciation and love for them grows. But the concept of love itself...I don't think I can ever feel it again the way I once did. So what does that mean?

It's so hard for me to let go.

I need to do something physical that involves letting go...

Night tremors
What keeps you up at night?
Reply 434
My dogs

BFF
How long have you had your best friend?
Reply 499

Just popping in to say that bitter rants can be funny, WHEN RANTED PROPERLY or improperly, depending on how you look at it and

I get annoyed by stupid things

and I don't mind if people get annoyed by stupid things...EVERYONE does...

Isn't the Internet amazing?! The other day Alex called me and told me she wasn't near a computer, and wanted to know if I could find anything about a volcano eruption where she was because the sky had suddenly filled with smoke. I googled it and found an ARTICLE on it...I found an article and the smoky skies that had JUST APPEARED...in a completely different state! Isn't that awesome? We have such an advantage with the rapid exchange of information we are capable of.

Say I'm thinking about ducks, and I wonder if when a duck dies, you can take their beak and wear it as a hat...I JUST thought of that as I was typing it, so now...let's go to google...okay...uh, I was a little TOO random with that one and apparently am the first person to ever search that idea. But anyway, when you're not TRYING to be random and you just have a random thought, you can just go on the Internet and find MILLIONS of people who wonder the same things and have the same ideas. That's incredible! I'm glad to be alive during a period where technological growth is so rapid and constant. Although I do wonder...you know, I'm just too tired.

On a closing note:

madamelafarge
Blast to the past
If you could travel back in time, what would you tell your 10-year-old self?
Reply 1083

I wouldn't tell her anything because she wouldn't listen.

Or I'd say "Don't be too freaked out that this is an infinite loop."